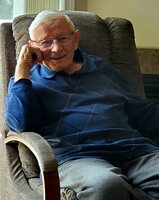 With heavy hearts we announce the passing of Helmut at Columbia House in Invermere, B.C., with his loving wife Gerda and son Ron by his side, on October 8, 2021, at the age of 88 years.

Helmut was born in Poland. After the war, his parents and family moved to Germany. In 1952 Helmut immigrated to Canada, 2 years later he sent for his girlfriend Gerda still in Germany. They were married in Vernon, B.C., in 1954. In June 2021 Helmut and his wife Gerda celebrated their 67th Wedding Anniversary. Helmut and his wife were blessed with three wonderful sons, Gary, Randy, and Ron.

Helmut worked many years as a millwright for Weyerhaeuser Canada, he also liked to travel and be with his family and friends. Helmut liked music and ballroom dancing. On their wedding anniversary Helmut took his wife Gerda to Harrison Hot Springs, B.C.,they fell in love with the place, so Helmut made sure to take his wife every year on their anniversary to dine, dance and have a good time in Harrison.

Helmut was predeceased by his dear son Gary in 1976. His four younger brothers and his dad in the 1940’s, his mother Luisa Kruger in 1997.

Helmut is survived by his loving wife Gerda, his sons Ron and Randy (Vicky), grandchildren Jason, Amanda (Marc), his brother Felix, Kruger and sister-in-law Erma Kruger, many cousins in Canada and Germany.

Our heartfelt thank you to the amazing staff at Columbia House, the care, love, and compassion you gave Helmut was above and beyond. You all became an extension to our family.

We also would like to thank Dr. Walsh for all the years you took such good care of Helmut and the encouraging words you had for us during Helmut’s final days.

Thank you to Pastor Mel Kornfeld for all the prayers and blessings over the Phone from Edmonton.

To all our friends thank you from the bottom of our hearts for all the love you gave us.

As we watch the years roll past

We have shown that love will last

Beautiful memories we have shared

I shared with you because you cared.