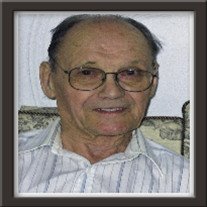 It is with great sorrow that the family of Floyd Johnson announce his sudden and unexpected passing at Joseph Creek Care Village on February 27, 2009.

Floyd was born in Shaunavon, Saskatchewan in 1924. He grew up with his four brothers in a small, one-bedroom house, near Admiral, Saskatchewan during the Great Depression and Dust Bowl years. For entertainment during the long prairie winters, the boys learned to play instruments that their father built. The brothers soon became well known for their musical talents. Music was Floyd's passion and he could play the cello, guitar, violin and banjo. He was also blessed with a strong voice and he and his two brothers, Alf and Sig, entertained at many local venues during the 1940's and 1950's. Floyd moved to Cranbrook in the 1940's where he worked in the logging industry. He met and married Helene Schellenberg in 1947. They lived on an acreage outside of Cranbrook where they raised purebred Arabian horses and maintained a small farm for many years. Floyd opened his own General Repair Service in 1955 & he also worked for Hume Electric but he was best known for his delivery service for the Spic and Span Cleaners. He also worked many years for Miller & Brown Trucking, Direct Transport and Motorways. Floyd was an executive member of the original Cranbrook Boxing Club and he was a lifelong member of the Scandinavian Brotherhood. Floyd was truly devoted to his family. He always put the needs of his family, friends and animals first. He had a friendly, kind and generous spirit. He focused on the positive and never complained. He always saw the best in everyone.

Floyd was predeceased by his wife in 1994 and his son, Duane, in 2005. He was also predeceased by his four brothers: Elmer, Alf, Sig and Eldor. Floyd is survived by his daughter Sonja (Franco) Leschiutta and granddaughter Lindsay; daughter-in-law Jean Johnson; grandchildren: Debbie (Sonny) Pawar, Shannon (Ricardo) Leiva, Lesley Johnson, Gregory Johnson and three great grandchildren.

A memorial service for Floyd will be held at McPherson Funeral home in Cranbrook, on Tuesday, March 17, 2009 at 2:00 pm. In memory of Floyd, those wishing to make a memorial contribution may do so to the: Canadian Canadian Red Cross Society, Central / Southern Okanagan Office, #5, 1414 - Hunter Court, Kelowna, BC, V1X 6E6 or to the charity of your choosing.

Arrangements entrusted to McPherson Funeral Service.Condolences for the family can be offered at:www.mcphersonfh.com

To send flowers to the family or plant a tree in memory of Floyd Johnson, please visit Tribute Store

Share Your Memory of
Floyd
Upload Your Memory View All Memories
Be the first to upload a memory!
Share A Memory
Send Flowers