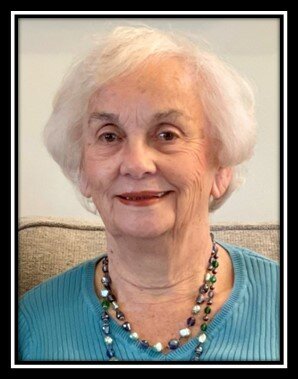 Please share a memory of Susan to include in a keepsake book for family and friends.
View Tribute Book

With deep sadness and heavy hearts, we announce the passing of Susan Muriel Caws (Neè Lum), on September 7th, 2022 at Kelowna General Hospital. Susan was born in Cranbrook and was raised in Fort Steele with six siblings. Susan attended primary school in Fort Steele and graduated from Mt.Baker High School in Cranbrook. Soon after graduation she joined the Royal Canadian Air Force.

Susan and Peter met at #2 Fighter Wing Gros Tenquin in France where Peter was an F-86 fighter pilot and Susan was a dental assistant. They were married on September 3rd, 1958 in Bistroff, France.

Susan was an amazing mother of four and loving grandmother of seven.

After Susan and Peter retired they moved to Mayook, British Columbia where Susan enjoyed gardening.

Golf life brought Susan great companionship and plenty of exercise right up until the first week of July this year.

Susan also volunteered her time at the Steeplesview Reading Center in Wardner, B.C. and always loved to help others. At the time of her passing, her husband Peter remarked that they had been married for sixty-four years and four days. Susan is survived by her husband Peter John Caws and their children; Greg, Marion, Michele and Nicolle, as well as her grandchildren Jennifer, Emmanuelle, Madeleine, Bradley, Adam, Jason and Elizabeth.  Susan was predeceased by her parents Beryl and George Lum.

At this time the family asks that any Memorial Donations be made to Doctors Without Borders/Médecins Sans Frontières (MSF) Canada.

A memorial service in honour of Susan will be held on Thursday September 22, 2022 at 10:30am at the Church of St. Joseph in Jaffray British Columbia. A private graveside service will be held afterwards at Fort Steele Cemetery. The family would also appreciate the wearing of masks at the service and to not attend if you are feeling unwell.

Share Your Memory of
Susan
Upload Your Memory View All Memories
Be the first to upload a memory!
Share A Memory