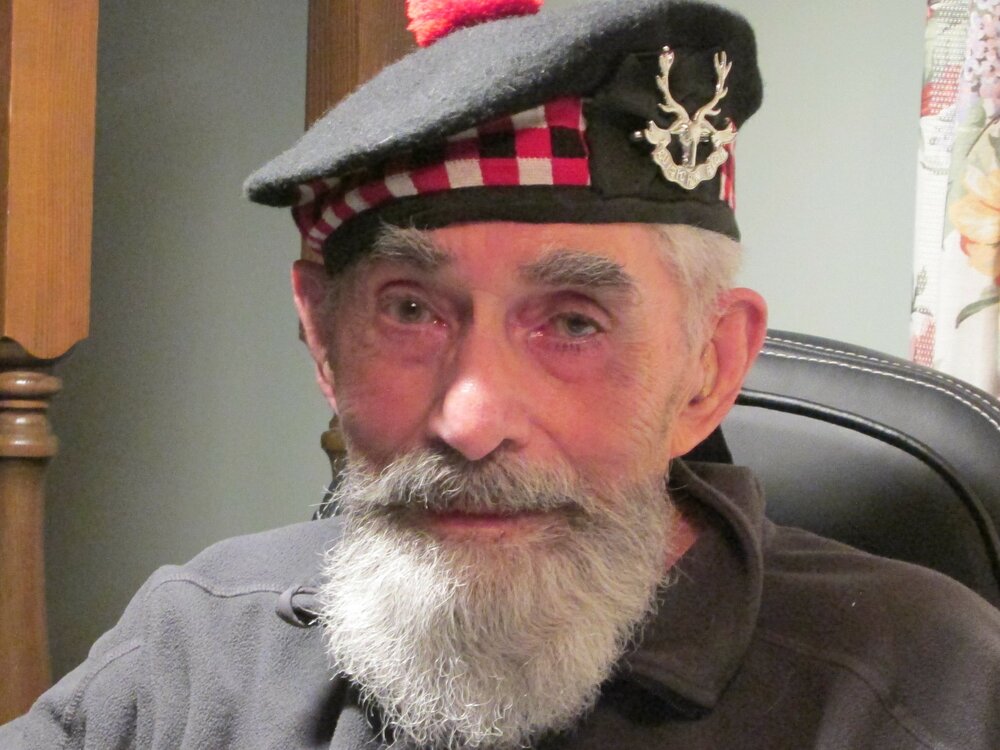 Please share a memory of Lawrence to include in a keepsake book for family and friends.
View Tribute Book

On the evening of October 13th, 2022, Lawrence E. (Larry) Taylor left this world and said farewell to his PTSD, pain and anxiety.

Larry always said he wanted to make it to 100.

Mentally he was prepared, however physically in the end, it was his body which could not continue on.

Larry was born in Hope, British Columbia on January 17th, 1924, the eldest of 5 children, he was left to make his own way in the world at an early age.

Over his lifetime he worked on ranches, the railway, logging and in underground mining as a Diamond driller.

He was a control tower operator at the Deas Island Tunnel, worked as a highway construction foreman in Northern B.C., where he became an explosives expert, and retired as senior road foreman for the Department of Highways in Cranbrook.

At the Age of 17 he volunteered and joined the Rocky Mountain Rangers eventually becoming a Seaforth Highlander. He served overseas and saw action in Sicily, Italy, and Holland, and was proud to be known as a D-day Dodger.

While stationed in England and on leave he met his wife, Kay.

Dad loved sports and was a boxer, a baseball player, and a hockey player. He curled and loved to hunt and fish.

He was an artist and could draw and paint. He built log cabins and we often joked that if you gave Dad a piece of plywood, he could make you anything useful out of it.

At the age of 85, after learning to use a computer, he became an author and wrote and published his life story.

Larry left an impression on young and old, had a dry sense of humor and was a great storyteller.

He will be missed by many who knew him.

He is survived by his brother Lewis, son Neil, daughter Lynn and son Lee (Tracy), as well as his Grandchildren, Great-Grandchildren and many nieces and nephews.

He was predeceased by his wife Catherine (Kay) of 61 years, one brother, two sisters and two grandchildren.

Do not weep for me

For I have not gone

I am the memory that dwells

In the hearts of those that knew me.

To send flowers to the family or plant a tree in memory of Lawrence Taylor, please visit Tribute Store
Online Memory & Photo Sharing Event
Online Event
About this Event