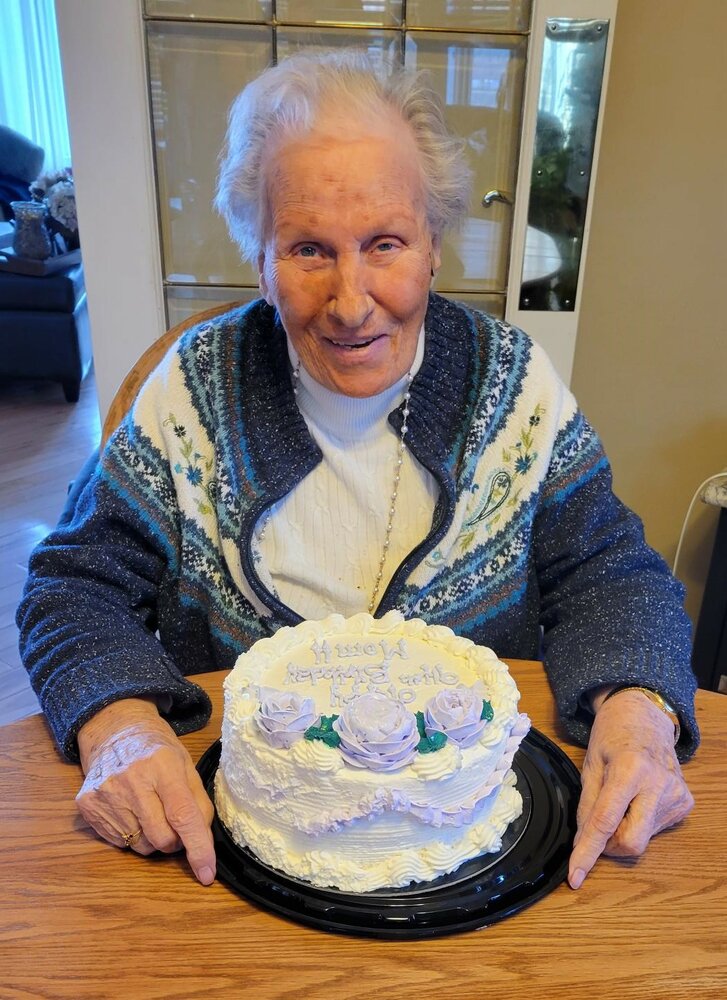 Please share a memory of Hilda to include in a keepsake book for family and friends.
View Tribute Book

It is with heavy hearts we announce the passing of Hilda Winifred Merriam on November 30th, 2022. Winnie was born in Verdun, Quebec along with her twin brother Wilf, the youngest of four children. Winnie moved west in the early 1950’s and met the love of her life, Rocky, in Kitimat British Columbia. They moved with their three children to Revelstoke B.C. in 1965 where Rocky was tragically killed in 1969. Winnie worked at BC TEL in Burnaby while raising her three children. Winnie retired in 1993 and took the time to enjoy travelling and spending time with friends near and far. Winnie loved playing bingo and met many great friends there. Winnie was a loving mother, grandmother, and great grandmother and will be greatly missed.

Winnie lived in Cranbrook B.C. for many years and spent the last two and a half years living independently at Kootenay Street Village where she met many new friends. Winnie passed away peacefully at East Kootenay Regional Hospital after a hard fought battle with covid that weakened her. Winnie’s family would like to thank the Nurses, Doctors and staff of the East Kootenay Regional Hospital for their compassionate care in Winnie’s final weeks. The family would also like to thank the staff and residents of Kootenay Street Village, Winnie loved living there and cherished her memories and friendships made there.

At Winnie’s request there will not be a service at this time, and memorial donations in Winnie’s name may be made to your local SPCA, Food Bank, The Heart & Stroke Foundation of Canada, The British Columbia Cancer Society or a charity of your choice.

To send flowers to the family or plant a tree in memory of Hilda Merriam, please visit Tribute Store
Online Memory & Photo Sharing Event
Online Event
About this Event

Share Your Memory of
Hilda
Upload Your Memory View All Memories
Be the first to upload a memory!
Share A Memory
Send Flowers