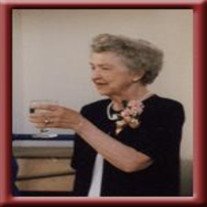 Yvette passed away on September 20, 2006 in Cranbrook, British Columbia at the age of 83.

She was raised and educated in Northern Alberta. She moved to Cranbrook as a young teacher where she met Roger. They were married in 1949 and raised 3 children. Yvette dedicated her life to her family and working in the family businesses. She was a member of the Catholic Women's League for 50 years and loved to play golf. Yvette is survived by her husband Roger, son Raymond, of Cranbrook, daughters Denise Van Amerongen (Ron Hayward) of Cranbrook and Louise Williams (Max) of Newfoundland. She will also be lovingly remembered by her grandchildren: Cindy, Trevor, Nelson, Renee and Michael, sisters Cecile Maisonneuve (Paul), Claire Meashaw (Delbert), Rita Lizotte (Maurice) and Marcella Murdoch, brother Marcel Houde (Gladys), brother-in-law Lawrence Savarie (Loretta) sister-in-law Pauline LaPrise as well as many nieces and nephews.

She was predeceased by her sister Rachel and brothers Rollie, Robert and Arthur.

A memorial service will take place at 11:00 am on Monday September 25th, 2006 at McPherson Funeral Chapel in Cranbrook, British Columbia, Myra Farquhar officiating.

To send flowers to the family or plant a tree in memory of Yvette Savarie, please visit Tribute Store

Share Your Memory of
Yvette
Upload Your Memory View All Memories
Be the first to upload a memory!
Share A Memory
Send Flowers