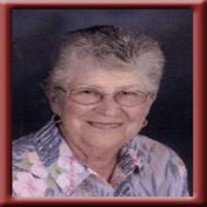 With great sadness the family announces the sudden passing of Lenore "Gram" Neads on February 23rd, 2007 in Cranbrook, British Columbia at the age of 75.

Born November 20, 1931 in Lloydminster, SK, Lenore was committed to her family, especially her grandchildren. She would spend many hours baking and cooking in preparation of a visit with them. Lenore was passionate about her crafts. She was a master seamstress and spent many hours with her friends creating heirloom quilts. Memories of times spent with Lenore will be cherished by all who were blessed to share in her company.

Lenore was predeceased by her parents Herbert and Evelyn Tebo of Vernon, B.C.

A memorial service will be held at 3:00pm on Wednesday, February 28, 2007, at McPherson's Funeral Chapel, Cranbrook, British Columbia. Cremation will precede the service.Memorial donations may be made to the Parkinson Society British Columbia, Suite 600 - 890 W. Pender St, Vancouver, B.C., V6C 1J9.

To send flowers to the family or plant a tree in memory of Lenore Neads, please visit Tribute Store

Share Your Memory of
Lenore
Upload Your Memory View All Memories
Be the first to upload a memory!
Share A Memory
Send Flowers