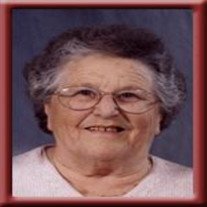 passed away on February 25, 2007 at the East Kootenay Regional Hospital, Cranbrook, British Columbia, at the age of 81.

Lore was born in Tubingen, West Germany on May 8, 1925 to parents Alfred and Lena Ambacher. She married Gerhard Langenbach in Kresbronn Germany, on December 6, 1954 and together they immigrated to Canada in 1955. Lore, worked alongside her husband Gerhard at East Kootenay Greenhouses until her retirement.

While Lore loved to travel, especially to such places as Yellowstone, Coeur d'Alene and South Africa, her fondest memories were of raising her four children and watching her grandchildren grow up. Lore loved cooking and it brought her great enjoyment to see her grandchildren eating the spaetzle she made for them.

She was predeceased by her husband Gerhart, January 20, 2007, her parents and sister Maria Muller.

.Lore will be fondly remembered by all her family and friends.Memorial donations may be made to

To send flowers to the family or plant a tree in memory of Lore Langenbach, please visit Tribute Store

Share Your Memory of
Lore
Upload Your Memory View All Memories
Be the first to upload a memory!
Share A Memory
Send Flowers