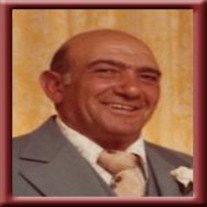 Cris passed away peacefully with his family at his side, February 23, 2007, at The Pines Special Care Home, Kimberley, British Columbia, after a lengthy illness.

He was born October 15, 1927 in Pietrapennata, Italy. After marrying Angelina in 1955, they immigrated to Canada, settling in Kimberley, British Columbia. Fortunato worked a variety of jobs until he established his own masonry business. He was an avid hunter, fisherman and gardener, and was always there to lend a helping hand.Cris was predeceased by his parents Victtoria and Guiseppe Cristiano.

Cris will also be dearly missed by his brother Lorenzo (Mimi) and sisters Teresa (Frank) Miller and Nata Priolo as well as numerous nieces and nephews, cousins and their families.

Donations in memory of Cris may be made to The Pines Special Care Home, 386 2nd Ave, Kimberley V1A 1Z8.Funeral Services will be held at 11:00 am on Friday March 2nd, 2007 at McPherson's Funeral Chapel, Kimberley, British Columbia.

To send flowers to the family or plant a tree in memory of Cris Cristiano, please visit Tribute Store

Share Your Memory of
Cris
Upload Your Memory View All Memories
Be the first to upload a memory!
Share A Memory
Send Flowers