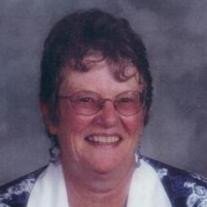 Please share a memory of Dorothy to include in a keepsake book for family and friends.
View Tribute Book

Dorothy was predeceased by her parents Jack and Myrtle Gibson, and infant brother, as well as her adoring canine companion Ringo.

Comforting and assisting Phyllis through her long struggle was her long time friend Marjorie Wood of Innisfail, Alberta.

Phyl's love and passion of photography and scrapbooking are well known and enjoyed by many. Her diligence in genealogy resulted in the eventual discovery of her mother's many "lost relatives". Phyllis spent the last few years traveling on many bus tours to England, Scotland, New York City, Scandinavia. In her earlier years she travelled to Australia, Hong Kong and New Zealand. When she was not travelling, she spent her summers in Riverhurst, Saskatchewan in her "Glorified Tent"!

Please drop by to join us in a celebration of Phyllis' life on Saturday, March 6, 2010 between 1:00 and 5:00 pm at 805A - 24th Avenue North in Cranbrook. A memorial service and Interment will be held at a later date in July 2010 in Riverhurst, Saskatchewan. Anyone wishing to make a donation in honour of Phyllis' memory may do so to the SPCA or a charity of your choice.

To send flowers to the family or plant a tree in memory of Dorothy Spetz, please visit Tribute Store
Print
Online Memory & Photo Sharing Event
Online Event
About this Event