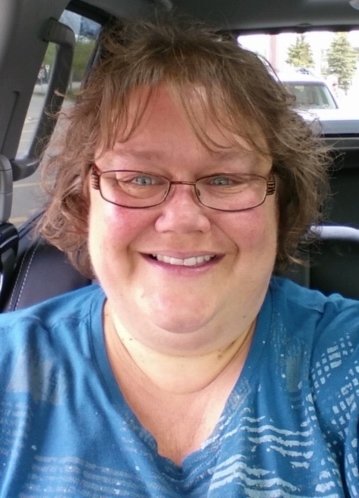 It is with great sadness that we announce the passing of Andrea Elaine Beable (McPherson) on November 19, 2019 at the age of 48. Andrea passed peacefully with her husband Al, son Logan, brother Gary, and many close friends right by her side.

Andrea was born on February 10, 1971 in Nanaimo B.C. Andrea’s earliest years were spent in Port Coquitlam, but in 1977, at the age of 6 she moved with her family to Cranbrook; the city she would call home for the rest of her life.

Andrea lived a childhood filled with fun and adventure – she loved playing at Idlewild Lake in the summer, skiing in Kimberley during the winter, and swimming with the Cranbrook Titans swim club throughout the year.

One of Andrea’s passions was being part of the Cranbrook Girls Bugle Band. She treasured the friendships and road trips that came with being a member of the bugle band. The highlight was always the annual trip to the Calgary Stampede parade. As an adult, Andrea continued to be involved with the Bugle Band as a volunteer and chaperone.

Andrea was also one of those lucky people that found her calling early in life. Be it good fortune, or fate, Andrea began working at Cranbrook Safeway as a cashier when she was only 16 years old. It was a job that allowed her to be both helpful and social at the same time – a perfect fit! Andrea went on to work at Safeway for the next 32 years, and would always speak with pride about her career.

Many of Andrea’s best friends were also her Safeway co-workers. It says a lot when you can work with people 40 hours a week, and then choose to spend more time with them outside of work! Anyone who has seen these friendships first-hand knows what a special group her Safeway friends were.

Andrea went on to graduate from Mount Baker in 1989. While in high school, Andrea had many close friends. The group of friends spent countless hours getting into youthful mischief while cruising the streets of Cranbrook in Andrea’s flashy blue Chevy Sprint. Andrea was heartbroken when one of the group, Tanya, passed in 2012 after a brief battle with cancer. Watch out up there, they are together again!

In 1993, Andrea met Alan Beable in Calgary – they were introduced by a common friend. Romance ensued and Andrea and Al were married on June 28, 1997 (the very same day Mike Tyson took a chunk out of Evander Holyfield’s ear). Al was Andrea’s first real love, and she was blessed to get it right the first time. Al and Andrea cherished their time together; they enjoyed countless activities together including, swimming at Koocanusa, golfing, camping (a bottle of Baja Rosa was always close at hand), kayaking and Pokémon Go! (explain that to me again?).

On February 11, 2003, Andrea and Al welcomed their son Logan Beable to the world. From that day forward, Logan was Andrea’s greatest joy. Andrea was the ever present loving mother – she attended every hockey game, school event, and encouraged all his boyhood passions…even if she didn’t quite understand them (notably Bakugan and Magic). Andrea took endless pride watching Logan grow into the sweet, clever, kind, funny and silly person he is today.

Andrea didn’t just enjoy watching Logan participate in activities, as was her style, she wanted to help out. She was active in Logan’s minor hockey, where she managed the team for two years. Along with Al, she also volunteered for the 552 Key City Air Cadet’s on the sponsoring committee.

Andrea also loved travelling and was fortunate to visit some incredible destinations throughout her life including Hawaii, Mexico and Disneyland. However, the highlight was travelling to Australia in 2015 with Al and Logan, to participate in the Friendship Hockey Tournament, where Logan was the goaltender of the team.

In 2016, Andrea was diagnosed with endometrial cancer. Andrea was a warrior and fought the diagnosis with a spirit and humour that only she could - that trademark twinkle in her eye rarely wavered.

Andrea was predeceased by her mother Shirley in 1987, and father Murray in January 2019.

The family would like to extend their heartfelt thanks to the nursing staff at the East Kootenay Regional Hospital and Dane at McPherson Funeral Home for helping us through this difficult time.

A celebration of life for Andrea will be held on Saturday November 30th from 2:00 to 4:00 pm at the aptly named McPherson Funeral Home.

Donations may be made entrusted to McPherson Funeral Services for funeral costs/services relating to the final arrangements for Andrea.

To send flowers to the family or plant a tree in memory of Andrea Beable, please visit Tribute Store
Saturday
30
November

Share Your Memory of
Andrea
Upload Your Memory View All Memories
Be the first to upload a memory!
Share A Memory
Send Flowers