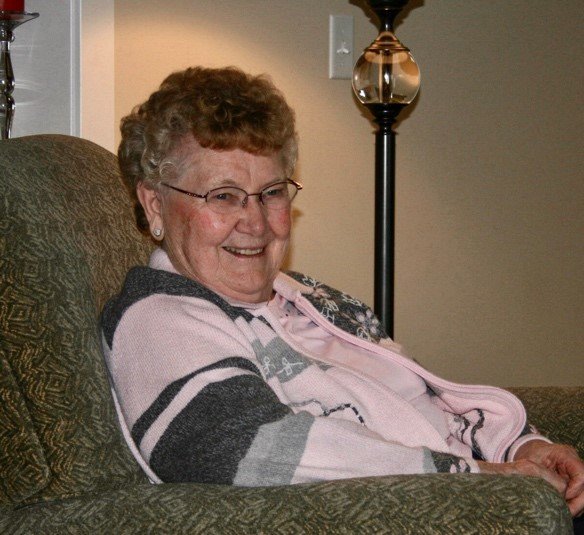 Eulala “Peggy” Harris was born January 1, 1922 in Scobey, MT to Arthur and Fern Minor.  At age 4 the family moved to Carnduff, SK. where she later met and married Roy Verity in 1943.  They had 3 children while living in Canada before moving to Kalispell, MT where they had 2 more children.  Peggy was a homemaker who thoroughly enjoyed her family and involvement in her church.

Roy passed away in 1973 and Peggy relocated to Cranbrook, B.C. with her two youngest children to be closer to her eldest daughter and family.  She married Roy Steeves in 1989 and moved back to Carnduff, SK.  They were married 14 months before Roy passed away.  Two years later she married Cecil Harris and they were married for 17 years before Cecil passed away in 2011.  In 2013 Peggy moved back to Cranbrook where she resided at Joseph Creek Village until her passing.

Religion was always an important part of Peggy’s life.  She was a devoted Christian her entire life.  Since moving back to Cranbrook, she attended Knox Presbyterian Church.

The family would like to extend special thanks to the staff at Joseph Creek Village and Cranbrook Regional Hospital.

In lieu of flowers, donations may be made to a charity of your choice.

To send flowers to the family or plant a tree in memory of Peggy Harris, please visit Tribute Store
Friday
6
December

Share Your Memory of
Peggy
Upload Your Memory View All Memories
Be the first to upload a memory!
Share A Memory
Send Flowers