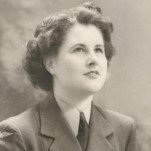 Valencia Dawn Douglas (Bohmer) lovingly known as Dawn passed away peacefully, surrounded by her children at her home in Cranbrook, B.C., on July 21, 2020, at the age of 93.

Dawn was born October 21st, 1926 in Cardston, Alberta, to Bernard & Zina Bohmer. At an early age her parents moved their family of eleven to the Creston Valley where she grew up and attended school.

Dawn attended business college in Trail and was working at a bank when WW2 broke out. She proudly made the courageous decision at a young age to serve her country, enlisting in the Royal Canadian Air Force Women’s Division. Dawn then became a Wireless Operator with the rank of Leading Aircraft Woman.  She took basic training in Ottawa followed by six months in Montreal where she completed her Wireless Operator training and learned Morse Code. Upon completion of her training she was stationed at Pat Bay on Vancouver Island. She served there until the war ended, and the Women’s Division was disbanded.

At the end of the war Dawn met and married Bernie Douglas and they lived in Cranbrook where their son Brian was born. In 1950, CPR transferred the growing family to Revelstoke where daughters Diane and Melanie were born. In 1958 dad was again transferred with CPR moving the family back to Cranbrook.

Upon their return, mom decided she wanted to become a Stock Car Racer much to the chagrin of our dad. Mom raced in the Powder Puff Derby at Echo Field Raceway for several years, until the steering went on her car and she crashed wiping out the outhouse, wrecking her car, and breaking her nose!, thus ending her promising career as a Stock Car Racer. Following that she turned to a safer sport; bowling, one that she excelled at winning the East Kootenay Ladies Championship and many other tournaments in the Kootenays.

In 1959 mom began her career with the City of Cranbrook and after 31 years and numerous mayors later (oh the stories she could tell) she retired in 1990. She became a Snowbird venturing to Mesa, Arizona with her partner Jake Goodman. Her knowledge of the Morse Code came in handy when Jake took up amateur Ham Radio and was required to learn it for his license. Mom said it was like riding a bicycle it all came back to her as if it was yesterday. Mom also took up golfing at the age of 63 and enjoyed many a round of golf in Mesa where she got her one and only “Hole in One”. She continued to golf in the Ladies League at the Cranbrook Golf Course for many years after they quit going south.

Mom was very proud of her time in the Air Force. She joined the Ladies Auxiliary to the Royal Canadian Legion Branch #24, where she held numerous executive positions, from the President to the most recent being the Treasurer for the past ten years. She retired from that position at the age of 93.

Mom was fondly known as the “Rag Lady” at the Cranbrook Health Care Auxiliary Thrift Store. She was still an active Life Member with over 20 years of volunteer service. Two days a week you would find her smiling face behind the rag cutting machine at the store.

Mom loved all sports and could be found cheering on her teams depending on the season. It was either the Canadiens, the Raptors, the Blue Jays, or PGA and LPGA golf.

She is also survived by her sister Carol Poelt of Coleman, AB, her brothers Wilton (Dorothy) Bohmer of Burns Lake, B.C., and Paige (Nola) Bohmer of Cardston, AB.

Dawn was pre-deceased by her husband Bernie, her partner Jake, brothers Lewis, Rupert, Dennison, and Bill, and her sisters Vergene, Aloha, and Nesta.

A private Celebration of Dawn’s Life will be held at a later date when her family can all be together.

In lieu of flowers, donations in Dawn’s Honour can be made to the Cranbrook Health Care Auxiliary P.O Box 573 Cranbrook, B.C., V1C 4J1

Share Your Memory of
Dawn
Upload Your Memory View All Memories
Be the first to upload a memory!
Share A Memory
Send Flowers