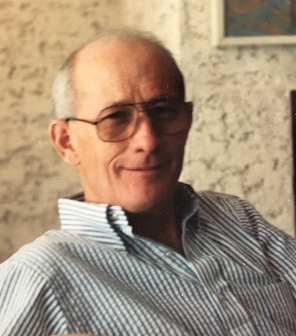 Lawrence “Larry” Keating, loving father passed away peacefully in Cranbrook, B.C, at the age of 96.

Larry was born in the Silverton, Manitoba area to Wallace and Hattie Keating in 1925, where his family farmed. In later years, the family moved to Clandeboye, Manitoba where they continued to farm. It was those years on the farm that taught Larry the value of hard work, a lesson he never forgot.

As many young men did, Larry joined the Navy when eligible and when discharged, returned to the family farm, and then took up the job as land surveyor in the Labrador area. This was a very happy and adventurous time for him, living in a tent with other surveyors in the snow and cold of Eastern Canada. Larry had a deep love of nature and the outdoors and honed his skills of building a campfire and keeping it going whatever the weather conditions. Larry spoke of these days fondly with his children and grandchildren.

In 1950, Larry met and married Joan Sample from Kerrobert, SK and returned to Clandeboye, Manitoba with his new bride. Early in their marriage, Larry joined Piston Ring Automotive in Winnipeg, MB and worked his way up from shop laborer to the position of General Manager. This was no small accomplishment and was achieved through dedication and an unwavering work ethic.

Upon retirement, Larry moved to Chemainus, B.C.,followed by Cranbrook where he spent many happy years close to his daughter Christie and her husband Menno.

Our Dad loved the outdoors and camping, driving countless miles on country roads across the prairies and west coast, golfing with friends and family, woodworking in his shop making many beautiful pieces shared lovingly. Eating ice cream, no matter the time of day or the weather, and talking about the Toronto Blue Jays and Winnipeg Blue Bombers with anyone who would listen. He was a fiercely independent man who lived life on his terms.

When asked what he would like said about him, Larry simply stated “I enjoyed life and the people I met”. That says it all.

He was predeceased by his brother Arvon and sister Margaret “Maggie”.

Family would like to extend thanks to the staff on the 3rd floor of East Kootenay Regional Hospital and Joseph Creek Village.

In honouring Larry’s wishes, no service will be held.

To send flowers to the family or plant a tree in memory of Lawrence Keating, please visit Tribute Store