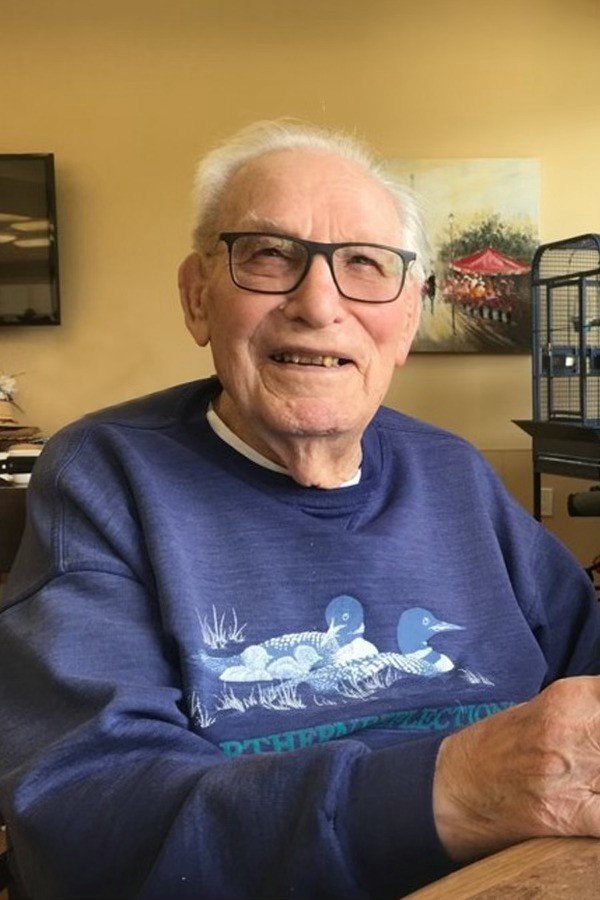 On June 30th, 2021, our dad James “Jack” Beckerjeck was re-united for eternity with the love of his life, our mom Doris.

On July 26th, 1924, in Parkland, Alberta he was welcomed into this world to parents, Louis and Elizabeth Beckerjeck. He grew up on the family farm, southeast of Stavely Alberta until his enlistment in the army in October 1943. Missing his “Sweetheart” back home, Jack and Doris decided to close the gap between them. They were married in June of 1944. At the time of Doris’ passing in June of 2020, they celebrated 76 years of marriage and a total of 78 years together. A true love story at its finest.

Their life together began in Calgary, Alberta where dad was stationed. This is where they welcomed all five of their children. Following his discharge from the army in 1946, he went on to become a Journeyman Automotive Mechanic. After years of twisting wrenches and the encouragement of his employer, he traded in his tools and decided to try his hand in the sales end of things. This proved to be a very successful career. Each year when the “New” car models were unveiled, dad would always bring those cars home. This was such a big deal, not only for us kids, but all the neighbourhood kids too. No one was ever left behind, every last kid got to go for a drive in one of the “coolest” new cars coming on the market. So much fun was had. Dad was not only “our” dad, but he was also like a dad to all of our friends. He always had a “gaggle” tagging along behind him. Camping and fishing were a couple of other adventures we went on with a few extra kids in tow. There was always room for one more potato in the pot and another kid or two in the tent.

In 1966 an opportunity presented itself in Cranbrook. By himself dad came out to “test the waters” and make sure this was his next calling. With three of their five kids grown and gone, and two left at home, in March 1967 dad and mom threw caution to the wind and decided to make the move. With the business purchase of a 24-hour truck stop, gas station, towing service, bulk plant and eventually a restaurant, ”Jack’s Husky Travel Centre” was born. Life was very busy. Throughout time four of the five kids and a couple of their spouses joined in the operation. Stories were told, laughs were shared, and memories began. Employee’s became family and lifelong friendships were made. Dad mentored countless kids as they worked along side him.

After the sale of the Husky, dad worked at the Cranbrook Golf Course in the summer, and the Cranbrook Curling Club as the ice maker in the winter. This led to him becoming the manager of the curling club. He enjoyed not only the sport, but all events and people he met along the way. Once again with mom working by his side, they spent the next ten years there until their retirement in 1987. He loved his yard and all the work it took to keep it looking like a park. It was never a chore, always a pleasure to him. I’m sure he pushed those lawnmowers a million miles. Never alone, there was forever a “critter” or two on his heals. He loved his sports, golf, curling, hockey, and baseball to name a few. He never missed a “Blue Jays” game, this being the last thing he watched. One of dads’ proudest accomplishments was winning the Canadian Army Softball Championship in both 1945 & 1946. In one of our recent chats a couple weeks ago, he listed off all the players and their positions on the team. He had a memory beyond belief, it put the rest of us to shame. He loved his music and had a collection of original wax 78 LP’s. As he played his “tunes” he provided endless good times at his shuffleboard parties. Over the years many fun tournaments were held. We all hoped to at least once, earn the bragging rights to the title of “Tournament Champion.” Each day there was something new to learn. Always up on the current Canadian and World events, he was our go to for information. His guidance, wisdom and never-ending love is something we will cherish. Dad loved his family. That was what life was all about for him. There was never enough time spent with his loved ones. He cherished every moment of every visit.

You will be forever in our hearts.

A heartfelt thank you to the kind and caring staff at the F.W. Green Home and McPherson Funeral Service.

Until we meet again, we love you dad.

A private family service will be held at a later date.

To send flowers to the family or plant a tree in memory of James Beckerjeck, please visit Tribute Store

Share Your Memory of
James
Upload Your Memory View All Memories
Be the first to upload a memory!
Share A Memory
Send Flowers