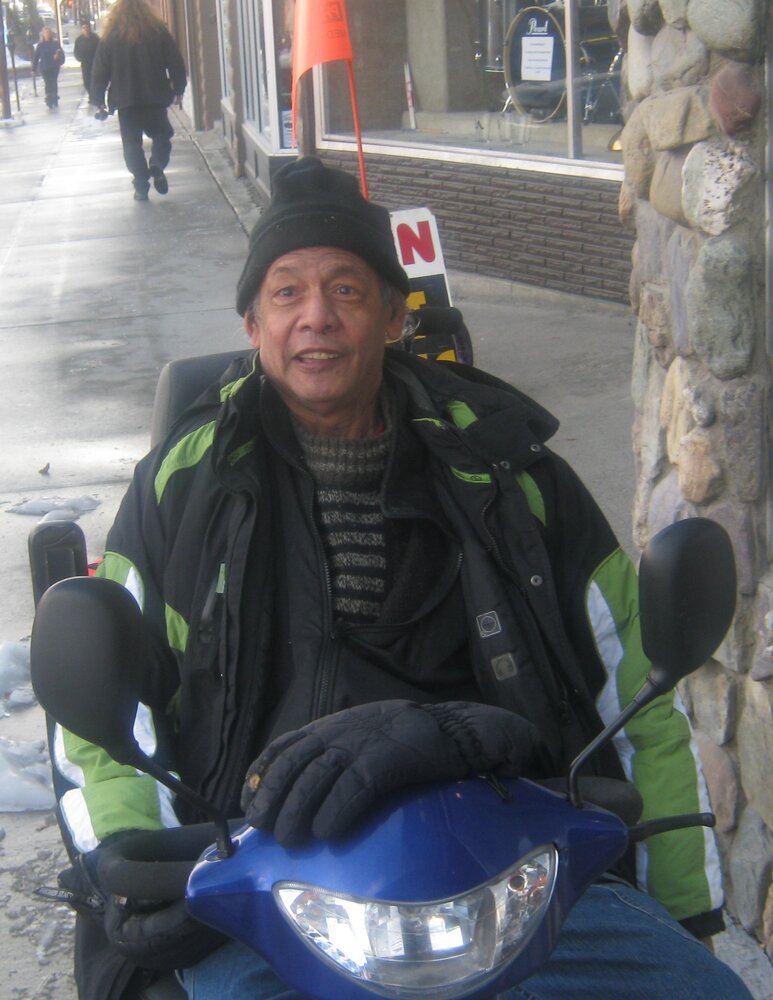 You see Bobby in this picture, in 2015 as he sits outside Kootenay Roasting Company, on his way for his daily visit and coffee.

We knew him as ‘Bobby’ as that was his English name, Bobby Mya Thein. ‘Bobby’ or Aung Kyaw Thein (Burmese name) died on January 29th, 2022, in Cranbrook, BC, from Congestive Heart Failure at the age of 72 years. Bobby arrived in Canada from a Thai refugee camp in June of 2000, sponsored by East Kootenay Friends of Burma (now EKFO Refugees). 2001 Bobby was financially supported by the Canadian Council for Refugees to attend 4 of their meetings to speak on behalf of refugees, from his perspective of having been in a camp and being sponsored to come to Canada. 2004 Bobby became a Canadian at a Citizenship ceremony at Gordon Terrace School. His understanding of English, his second language, served him well in passing the requisite test for citizenship. His understanding of the language also permitted him to help other refugees in the camp with writing their biographies when applying for sponsorship to go to another country.  Bobby was well known by some of the local sponsored Burmese refugees as he had helped them while in the camp in Thailand.

At the age of 50+ Bobby returned to studies at the Academy of Learning and received a Certificate in Office Computers in 2005.  In 2006 Bobby was in a pedestrian/car incident, which put him in hospital with serious injuries. He recovered from the injuries but had suffered a brain injury. During his time here in Canada, Bobby was a friend to many. His easy-going manner and a ready smile drew people to him. Aung Kyaw Thein played a crafty game of Scrabble having studied the dictionary carefully, to make the word combinations that garnered the highest points. In recent years when visitors were limited Bobby played scrabble against the computer and would often win. Bobby was at home playing computer Scrabble while the doctor checked him and ordered an ambulance to take Bobby to the hospital on January 27th.

Aung Kyaw Thein had a life in Myanmar (Burma) before he came to Canada. Bobby was born December 23, 1949, in Yangon (Rangoon) one of 6 children. He took his schooling in Yangon and wanted to become a Ship’s Captain. He learned all he could about this role and when he was not hired, he taught other young men about ships. Bobby worked as an interpreter for a large company in Burma.

In 1988 when the Student Uprisings in Burma happened Bobby was interpreting for journalists, which made him an enemy of the state and as a result he had to flee so as not to go to jail with others who had been caught up in the conflict. That is how he ended up in a refugee camp in Thailand for 7 years. We are glad Bobby chose Canada and Cranbrook to live out his years.

Bobby was predeceased by his parents U Mya Thein and Daw NiNi, his oldest brother Johnny, his younger sister Baby (15 years old) and his favorite Aunt who was like a Momma.

Many thanks to the nurses and Dr. Chesney for Bobby’s care in his final hours. Special recognition to Dr. Nishi who was exceptional in her care as Bobby’s Family Doctor. Thanks to George the building manager at Bobby’s apartment for helping Bobby out when needed. Acknowledgement to EKFO Refugees for their diligence in sponsoring Bobby and supporting him through his 21 years here, especially Shauna, Barb, Kim, Tessa, Francine, Marianne, Carolyn, and Roberta. Teena at Home Support and all the workers who helped Bobby over the many years are thanked. Thanks to those from Volunteer Kootenays who checked in with Bobby on a regular basis by phone. The EKC Credit Union tellers and staff who helped Bobby whenever he would come into the branch to ‘get money’ are appreciated. Kootenay Roasting Company was one of Bobby’s fav hangouts where he would have coffee and a dessert and conversation with those he met there. Thanks everyone.

Bobby’s sister Moira had requested a Traditional Muslim burial for Bobby and that has taken place. Thanks for the care and attention of a kind group of individuals, whose hearts and minds are generous and open, to provide a faith-based way to honour Bobby.  You are the type of people that make this journey of grief easier to navigate.

To send flowers to the family or plant a tree in memory of Aung "Bobby" Thein, please visit Tribute Store

Share Your Memory of
Aung "Bobby"
Upload Your Memory View All Memories
Be the first to upload a memory!
Share A Memory
Send Flowers