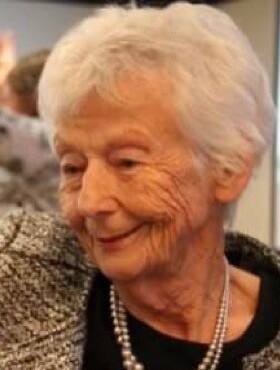 Please share a memory of Gloria to include in a keepsake book for family and friends.
View Tribute Book

Our beloved mother, grandmother, great grandmother, aunt and dear friend Gloria Margareta Axelina Barck (née Ekman) passed away on May 20th at the age of 96 with her closest family by her side.

Gloria will be lovingly remembered and dearly

She was predeceased by her husband Fjalar, son Rune, grandson Ronny, daughter in law Gunvor and brothers Nils and Gösta.

Gloria was born on Åland Island on January 27, 1926 were she met her husband Fjalar. In 1948 she, her husband and first born son Rolf moved to Sweden were they lived until 1975. In Sweden their children Rune and Karin were born.

Gloria and her husband were entrepreneurs of their time and managed numerous successful businesses in Sweden. In 1975 Gloria, her husband and their three children with families decided to take on a new adventure when they moved to Canada. In Invermere Gloria and her family laid down their roots and together with their two sons started a new successful business, Skandia Concrete.

Gloria was the heart and center of her family. She will be remembered by many for being genuine, her positivity and her friendly smile.

At Gloria‘s request, no service will be held.

The family wishes to send a special thank you to the staff at the Columbia Garden Village and Invermere District Hospital for their care and compassion.

To send flowers to the family or plant a tree in memory of Gloria Barck, please visit Tribute Store
Online Memory & Photo Sharing Event
Online Event
About this Event

Share Your Memory of
Gloria
Upload Your Memory View All Memories
Be the first to upload a memory!
Share A Memory
Send Flowers