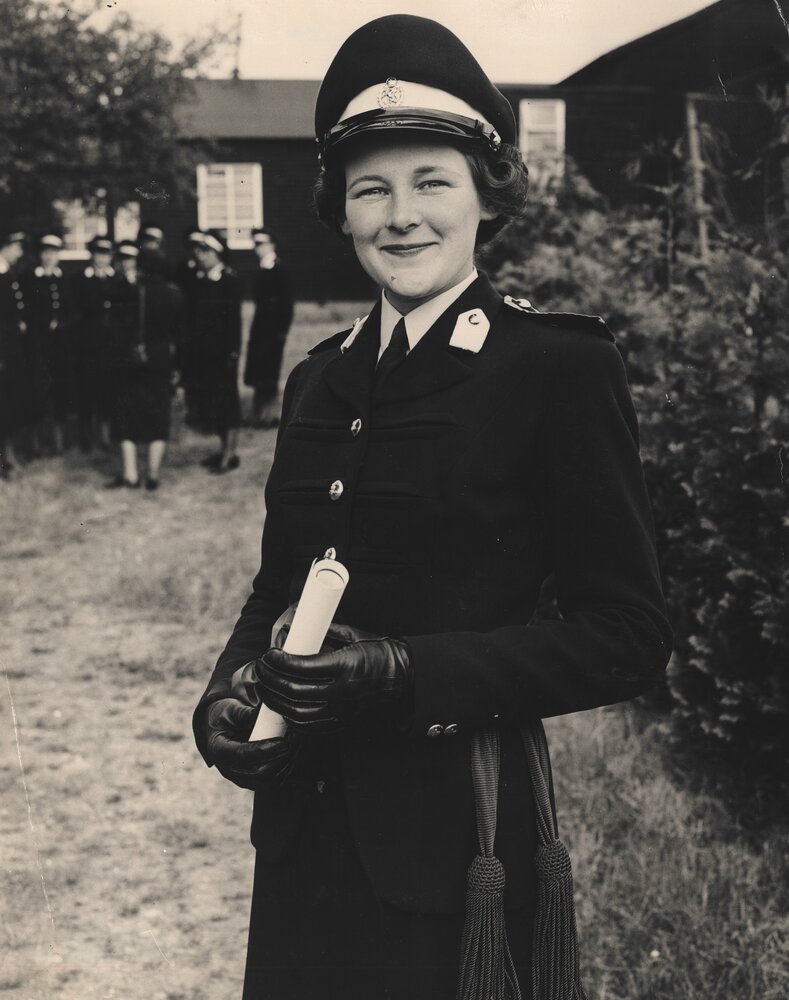 Obituary of Joan May Fruin

Please share a memory of Joan to include in a keepsake book for family and friends.
View Tribute Book

It is with great sadness that the family of Joan May Fruin announce her sudden passing at Garden View Residence in Kimberley, BC on June 16th 2022, in her 92nd year.   Joan was the daughter of the late Charles Lionel Gilling, and Doris Fildes Gilling, both of London, UK.  She is survived by her sister, Bunny (Doreen) Small, of Llandudno, North Wales, and her brother, David Gilling (Ann), of Southport, England.  Predeceased by her brother-in- law, Peter Small.  She is lovingly remembered by many nieces, nephews, and cousins in England, Wales, Canada, the US, and Australia.

She was born in Liverpool, UK, on August 9, 1930.  and raised in East Ham, London, during WWII.  Her formative years were influenced by the Blitz - wartime rationing, air raids, carrying a gas mask everywhere, spending many nights in the London Underground, and most notably, losing their home to a V1 Rocket (Doodlebug), during breakfast before school.

Mum joined the Women’s Royal Army Corps in 1950.  She served nearly 7 years, rising to the rank of Lieutenant.  She earned the Queen’s Cadet Honour, and the Red Sash, and was presented her commission by the (then) Queen Mother.  She met Malcolm during his National Service, and as the story goes, fell in love almost instantly.  She resigned her commission, and within a year they were married.

They emigrated to Canada in 1958 and settled in Montreal.  Malcolm joined Eli Lilly Co in 1964, and they moved to Toronto.  Sally and Russell already on the scene, with Neal arriving in 1965.  Lilly transferred Dad to Indianapolis in 1966 where we stayed for 3 years, then again in 1969 to Johannesburg, South Africa, for another 3 years.  Mum shepherded us on many “home leave” trips from Jo’burg to Indy by way of South America, Europe, and the middle east.  We are still amazed at how she did it.

The family returned to Canada in 1972, and settled in Bowmanville on Mearns Avenue, which became the family home.   So many happy memories of friends, dogs, cats, guinea pigs, family gatherings, laughter, and of Mum’s unwavering love, kindness, and patience.

Mum and Dad retired to Vancouver Island, then to Kimberley to be closer to Russell and Neal, and their growing families.  Mum immersed herself in the community and joined St John’s Anglican church where she became very involved, and made many dear friends.

She was a very spiritual lady, and while always active in the church, had a connection to nature and every living thing.   She gave her time selflessly, volunteer wherever she lived – Hospitals, Meals on Wheels, book exchanges, and libraries to name a few.  Her greatest passion was the Kimberley Helping Hands Food Bank , where she worked joyfully until only short time ago.  She was presented with a Quilt of Valour, by Military Ames, an organization that became dear to her in her final years.

So many friends left to mourn her, but to remember the wonderful lady she was, and her love, generosity, compassion, and ability to forgive.  She made everyone she met feel important and worthy.  We will miss her dearly.

There will be a service held on Friday August 5th, at the Kimberley United Church at 11:00 am. The service will also be livestreamed and recorded here for anyone who is unable to attend for any reason.

Anyone wishing to make a donation in Mum’s memory, her favourite charities included the Salvation Army, Kimberley Food Bank, Military Ames, and any Humane Society or an animal rescue.

Rest in Peace, and Rise in Glory, Mum!

To send flowers to the family or plant a tree in memory of Joan Fruin, please visit Tribute Store
Online Memory & Photo Sharing Event
Online Event
About this Event