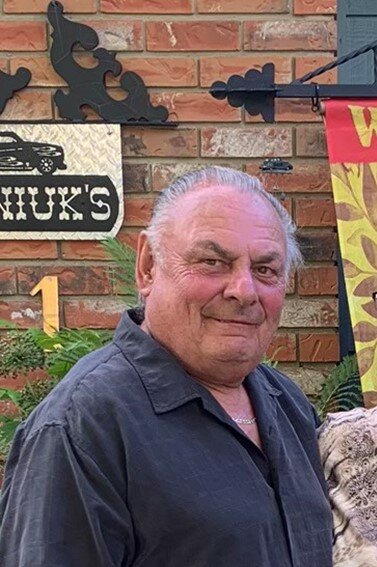 Please share a memory of Ron to include in a keepsake book for family and friends.
View Tribute Book

With very heavy hearts, we announce the sudden passing of Ronnie James Demaniuk on August 22nd, 2022.

Ron was born and raised in Burnaby, B.C. to parents Roman and Minnie Demaniuk. He spent many summers on his Uncle’s farm in Hafford, S.K. and loved his Triump motorcycle and 47 Ford as a teenager. Ron worked in the wood industry for most of his years, then Patrick Equipment in Burnaby. During Ron’s time in Burnaby, he met a local Burnaby resident and his future wife,  Darlene Ruoho in 1964. They became husband and wife on July 17th, 1965. Following they celebrated the birth of their children, Ron and Donna. Later, in 1976 Ron’s work took the family to Camrose, AB to once again work  in the treating industry and then 1982 to Cranbrook, BC to Kootenay Wood Preservers.

Ron was always artistic, either with drawing, woodwork, or metal art. Our yard is his studio that has all his incredible unique creations. All were created on the driveway of his home, from a very large dragon and butterflies to characters such as Big Bird and Road-Runner and so much more. Every project was from recycled material, other than ‘Spirit of Freedom’.

Ron submitted to City of Cranbrook thru Columbia Basin Trust Public Art Grant program. The ‘Eagle’ was chosen from other entries, it is iconic to our region and ties into the City’s Mountains of Opportunity branding. Over 200 steel feathers were hand crafted and welded into the finished creation over 25’ wide and 10’ tall. This can be viewed in Harmony Park in Cranbrook.

His love of classics continued from his youth to present. Our 1967 Chevy II SS original owners and our 1950 Merc Custom Low Rider. He was one of eight that started ‘Rockin in the Rockies Car Club’ in 1992 and served as President several times and we were made Honorary Members a few years ago. Ron was a member of BCHRA, SPABC and Cat Walkers Motorcycle Club which he also helped form back in 1961.

Ron was predeceased by his parents Roman and Minnie Demaniuk and brother Bob Demaniuk.

A celebration of Ron’s life will take place Friday, September 2nd, 2022 at 1:00PM at McPherson Funeral Home in Cranbrook, BC.

A live stream will be available on Ron’s obituary page for those who wish to attend virtually.

Donations in honour of Ron can be made out to the Cranbrook Health Care Auxiliary Society at 30 8th Ave S, Cranbrook, BC V1C 2K3

To send flowers to the family or plant a tree in memory of Ron Demaniuk, please visit Tribute Store

Share Your Memory of
Ron
Upload Your Memory View All Memories
Be the first to upload a memory!
Share A Memory
Send Flowers