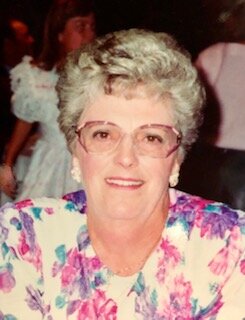 Doreen was born and raised in Calgary, Alberta. It was in Calgary, in 1956 that Doreen met her husband, David; they married the following year in 1957. Doreen packed up and moved their family ten times across Canada each time her husband was promoted and transferred over the course of his career. As well, Doreen travelled extensively with David during their forty nine years together. Doreen embarked on what would become her lifelong career with Sun Life Insurance, as an executive assistant. On retirement, the couple moved from Edmonton to their log home nestled in Fairmont Hot Springs, BC, where Doreen enjoyed over three decades of “valley life”! How she cherished the clean mountain air. Doreen had a passion for golfing and curling and aside from the sports themselves, Doreen took on the secretarial position on the Mountainside ladies golf league for several years. Doreen was a Director for the Fairmont Hot Springs Fire Department, an active volunteer for Fairmont Citizens on Patrol and also volunteered for the Neighborhood Watch. With a penchant for reading, Doreen delighted in the Fairmont ladies book club and relished the fellowship shared with her neighbors in their wine-making adventures.

Doreen was a loving mother, nana, grand-nana, sister, sister-in-law, aunt and friend to many. She will long be remembered for her zest of life, cherishing each moment; her wit and humour and the pure enjoyment derived from socializing with family and friends. Doreen had a heart of gold; she was loving, kind and generous with an infectious sense of humour. Doreen was deeply loved and she will be missed dearly.

A Graveside Service for Doreen will be held on Saturday September 17, 2022 at 1:00pm at Fairmont’s Evergreen Cemetery. Following, A celebration of Doreen’s life will be held at 2:00 pm at Mountainside Golf Course, with Pastor Brent Woodard officiating. Cremation preceding the service.

To send flowers to the family or plant a tree in memory of Doreen Murray, please visit Tribute Store
Online Memory & Photo Sharing Event
Online Event
About this Event