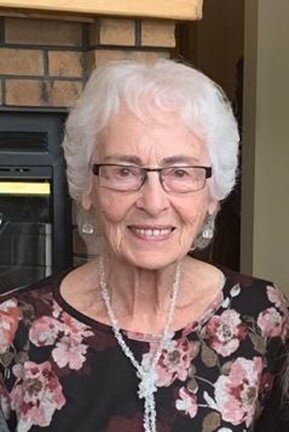 Please share a memory of Reta to include in a keepsake book for family and friends.
View Tribute Book

Reta was born and raised in Vancouver, BC. After high school, she received her teaching certificate and in 1948 moved to Kimberley to teach high school. Here she met Robert, the love of her life, and in 1952 they married and were together for almost 50 years.

Reta and Robert lived in logging camps along the Kootenay and Skookumchuk Rivers in the early years, where they welcomed two daughters, Jean and Denise. Then they moved to Canal Flats and finally Cranbrook in 1963, where Robert started a land surveying business. They built a new home and welcomed their third daughter Joyce.

They lived in the same home until Robert passed in 2001, where Reta continued to enjoy living until just before she passed away at 93.

Reta enjoyed hiking, skiing, time at the lake, tennis, golf, friends, and her passion for wildflower photography. Family was her greatest joy.

A service in honour of Reta will be held on November 21st, 2022 at 11:30 am at McPherson Funeral Home in Cranbrook, British Columbia.

in lieu of flowers Reta’s family asks that donations be made in her name to the BC Nature Trust.

To send flowers to the family or plant a tree in memory of Reta Lemaster, please visit Tribute Store
Online Memory & Photo Sharing Event
Online Event
About this Event

Share Your Memory of
Reta
Upload Your Memory View All Memories
Be the first to upload a memory!
Share A Memory
Send Flowers